On The Murder of George Floyd 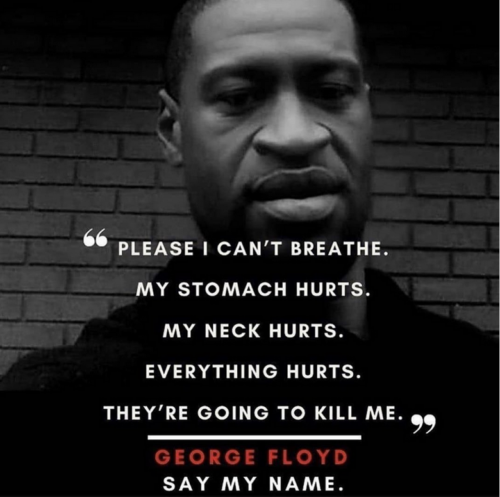 CJJC stands in solidarity with the Black-led rebellion in Minneapolis, MN in response to the murder of George Floyd by the police. We vehemently oppose state force used to repress them.Even as a global pandemic ravages the world’s population, leaving over 100,000 people dead in the U.S. alone, with that high number believed to be an undercount, Black communities have been disproportionately hit by the virus.

As we fight for our lives, our people are still being murdered by police and vigilantes. The purposeful lack of medical services and infrastructure and systemic racism in Black communities underscores how we are being subjected to the conditions of genocide.”

The entire internationally-recognized definition of genocide reflects the conditions of Black people in the United States. We have the human right to use any tactics we see fit to respond to these conditions. For a people who were stolen and brought into this country en masse as property, the destruction of capital as a consequence for the ongoing murder of Black life has been a historically legitimate tactic, from urban rebellions to larger-scale wars of liberation such as in the Haitian Revolution;  the 2nd Seminole War,  the Civil War and more.

Capital can be replaced, our Black lives can not.

We want our people to be safe and take necessary precautions to avoid infecting themselves and others, and at the same time we support the self-determined right to choose what tactics and risks people are willing to take on in the pursuit of justice and liberation. We, as a people, have every right to express our rage and revolt. As a young person stated at a growing memorial for Floyd, “There needs to be a change, and I know change doesn’t come so quickly overnight. I understand that, but there needs to be a change … The fear is really real. It’s really there and it hurts.”

Our people have been forced to endure economic repression, state violence, and austerity for centuries and this has rendered us highly vulnerable to this pandemic with Black people being 2.4 times more likely than white people to die from COVID-19.  Meanwhile, being murdered by the police is a leading cause of death for Black people.

The COVID-19 global pandemic is sweeping the world and yet, incarceration and murder of our people is still a priority of the state. Structural racism continues to create conditions for mass incarceration of the Black population. The criminal justice system is the most clear example of this. African American adults are five times more likely to be imprisoned than white North Americans.

As we organize and push for the release of our loved ones, one only has to look to Alameda County, at Santa Rita Jail, where more than 50 deaths have occurred under the helm of Sheriff Greg Ahern. But organizing works. And we celebrate the impending closure of County Jail 4 at 850 Bryant Street in San Francisco.  Abolishing policing and prisons is a step toward investing in a future we deserve.  We are a people fighting for liberation and self-determination — a fight that has always been about our survival and ability to control our destiny.

We mourn the death of George Floyd, a man who was murdered in the city he moved to for a better life. We mourn and honor the thousands and thousands of other Black people shot and killed in this country by police as well as white racists without a badge.

Most recently we remember Breonna Taylor, Ahmaud Arbery, and Tony McDade.  When Eric Garner’s mom Gwen Carr, heard of the murder of Floyd, she asked: “Why does this keep on happening over and over again?”

The crisis we are in has opened a window for us to push through the changes we want to see. We cannot return to the old world but must push forward together to create a bold vision for a new world where Black people thrive.

Feet on the ground, fist to the sky, eyes on the prize!
Sanyika Bryant, Lead Organizer